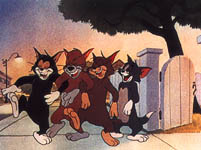 Biography
The three pals of Tom have been featured either together or seperate. Butch is the "leader" of this trio. There is also the Tall Orange Feline that first appeared with Tom in "Sufferin' Cats", 1943. The Short grey Cat has been paired with Tom in "Professor Tom" (1948) and was also featured with 2 other kittens in "Triplet Trouble", 1952.

Relationship to Tom and Jerry
Tom's Buddies.
A thorn in Jerry's side