"An important thing in life is getting the breaks. It's being somewhere at a certain time and a certain thing happens."
-Joe Barbera 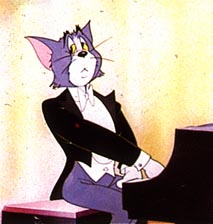 Liszt was the son of a steward in the service of the Esterházy family, patrons of Haydn. He was born in 1811 at Raiding in Hungary and moved as a child to Vienna, where he took piano lessons from Czerny and composition lessons from Salieri.

Two years later, in 1823, he moved with his family to Paris, from where he toured widely as a pianist. Influenced by the phenomenal violinist Paganini, he turned his attention to the development of a similar technique as a pianist and in 1835 left Paris with his mistress, the Comtesse d'Agoult, with whom he traveled widely during the following years, as his reputation as a pianist of astonishing powers grew.

In 1844 he separated from his mistress, the mother of his three children, and in 1848 settled in Weimar as Director of Music Extraordinary, accompanied by Princess Sayn-Wittgenstein and turning his attention now to composition and in particular to the creation of a new form, the symphonic poem.

In 1861 Liszt moved to Rome, where he found expression for his long-held religious leanings. From 1869 he returned regularly to Weimar, where he had many pupils, and later he accepted similar obligations in Budapest, where he was regarded as a national hero.

He died in Bayreuth in 1886, four years after the death of his son-in-law Wagner. As a pianist, he had no equal, and as a composer he suggested to a younger generation of musicians the new course that music was to take.

Several musical selections from Liszt's works can be found in the Victorian Station Gramophone.

Information Credits and other Resources: