"An important thing in life is getting the breaks. It's being somewhere at a certain time and a certain thing happens."
-Joe Barbera

The Cat Above and The Mouse Below 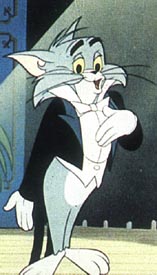 Both his parents were musicians, his father a horn player, his mother a singer; he learnt the horn and singing and as a boy sang in at least one opera in Bologna, where the family lived. He studied there and began his operatic career when, at 18, he wrote a one-act comedy for Venice. Further commissions followed, from Bologna, Ferrara, Venice again and Milan, where La pietra del paragone was a success at La Scala in 1812. This was one of seven operas written in 16 months, all but one of them comic.

This level of activity continued in the ensuing years. His first operas to win international acclaim come from 1813, written for different Venetian theatres: the serious Tancredi and the farcically comic L'italiana in Algeri, the one showing a fusion of lyrical expression and dramatic needs, with its crystalline melodies, arresting harmonic inflections and colourful orchestral writing, the other moving easily between the sentimental, the patriotic, the absurd and the sheer lunatic. Two operas for Milan were less successful. But in 1815 Rossini went to Naples as musical and artistic director of the Teatro San Carlo, which led to a concentration on serious opera. But he was allowed to compose for other theatres, and from this time date two of his supreme comedies, written for Rome, Il barbiere di Siviglia and La Cenerentola. The former, with its elegant melodies, its exhilarating rhythms and its superb ensemble writing, has claims to be considered the greatest of all Italian comic operas, eternally fresh in its wit and its inventiveness. It dates from 1816; initially it was a failure, but it quickly became the most loved of his comic works, admired alike by Beethoven and Verdi. The next year saw La Cenerentola, a charmingly sentimental tale in which the heroine moves from a touching folksy ditty as the scullery maid to brilliant coloratura apt to a royal maiden.

Rossini's most important operas in the period that followed were for Naples. The third act of his Otello (1816), with its strong unitary structure, marks his maturity as a musical dramatist. The Neapolitan operas, even though much dependant on solo singing of a highly florid kind (to the extent that numbers could be, and have been, interchanged), show an enormous expansion of musical means, with more and longer ensembles and the chorus an active participant; the accompanied recitative is more dramatic and the orchestra is given greater prominence. Rossini also abandoned traditional overtures, probably in order to involve his audiences in the drama from the outset. In Naples the leading soprano was Isabella Colbran, mistress of the impresario, Barbaia. She transferred her allegiance to Rossini, who in 1822 married her; they were not long happy together.

Among the masterpieces from this period are Maometto II (1820) and, written for Venice at the end of his time in Naples, Semiramide (1823). Barbaia gave a Viennese season in 1822; Rossini and his wife returned to Bologna, then in 1823 left for London and Paris where he took on the directorship of the Théâtre-Italien, composing for that theatre and the Opéra. Some of his Paris works are adaptations (Le siège de Corinthe and Moïse et Pharaon); the opéra comique Le Comte Ory is part-new, Guillaume Tell wholly. This last, widely regarded as his chef d'oeuvre, and very long, is a rich tapestry of his most inspired music, with elaborate orchestration, many ensembles, spectacular ballets and processions in the French tradition, opulent orchestral writing and showing a new harmonic boldness.

And then, silence. At 37, he retired from opera composition. He left Paris in 1837 to live in Italy, but suffered prolonged and painful illness there (mainly in Bologna, where he advised at the Liceo Musicale, and in Florence). Isabella died in 1845 and the next year he married Olympe Pélissier, with whom he had lived for 15 years and who tended him through his ill-health. He composed hardly at all during this period (the Stabat mater belongs to his Paris years); but he went back to Paris in 1855, and his health and humour returned, with his urge to compose, and he wrote a quantity of pieces for piano and voices, with wit and refinement that he called Péchés de vieillesse ('Sins of Old Age') including the graceful and economical Petite messe solennelle (1863). He died, universally honoured, in 1868.

Information Credits and other Resources: