Of all the Hollywood cartoon series, the Tom and Jerry cycle got the most out of the least, wringing over one hundred generally excellent episodes out of the minute, three-word plot description: Cat chases mouse. While the formula itself remained the same, different aspects of the equation were occasionally altered to distinguish the individual one-reelers from each other, which usually entailed the setting or the introduction of a character.
-Will Friedwald 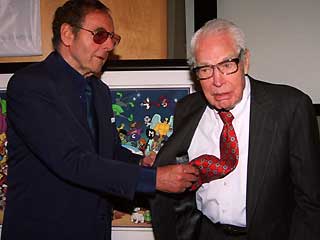 LOS ANGELES - Joe Barbera, half of the Hanna-Barbera animation team that produced such beloved cartoon characters as Tom and Jerry, Yogi Bear and the Flintstones, died Monday, a Warner Bros. spokesman said. He was 95.

Barbera died of natural causes at his home with his wife Sheila at his side, Warner Bros. spokesman Gary Miereanu said.

With his longtime partner, Bill Hanna, Barbera first found success creating the highly successful Tom and Jerry cartoons. The antics of the battling cat and mouse went on to win seven Academy Awards, more than any other series with the same characters.

The partners, who teamed up while working at MGM in the 1930s, then went on to a whole new realm of success in the 1960s with a witty series of animated TV comedies, including "The Flintstones," "The Jetsons," "Yogi Bear," "Scooby-Doo" and "Huckleberry Hound and Friends."

Their strengths melded perfectly, critic Leonard Maltin wrote in his book "Of Mice and Magic: A History of American Animated Cartoons." Barbera brought the comic gags and skilled drawing, while Hanna brought warmth and a keen sense of timing. "This writing-directing team may hold a record for producing consistently superior cartoons using the same characters year after year - without a break or change in routine," Maltin wrote.

"From the Stone Age to the Space Age and from primetime to Saturday mornings, syndication and cable, the characters he created with his late partner, William Hanna, are not only animated superstars, but also a very beloved part of American pop culture. While he will be missed by his family and friends, Joe will live on through his work," Warner Bros. Chairman and CEO Barry Meyer said Monday.

Hanna, who died in 2001, once said he was never a good artist but his partner could "capture mood and expression in a quick sketch better than anyone I've ever known."

The two first teamed cat and mouse in the short "Puss Gets the Boot." It earned an Academy Award nomination, and MGM let the pair keep experimenting until the full-fledged Tom and Jerry characters eventually were born.

Jerry was borrowed for the mostly live-action musical "Anchors Aweigh," dancing with Gene Kelly in a scene that become a screen classic.

After MGM folded its animation department in the mid-1950s, Hanna and Barbera were forced to go into business for themselves. With television's sharply lower budgets, their new cartoons put more stress on verbal wit rather than the detailed - and expensive - action featured in theatrical cartoon.

Like "The Simpsons" three decades later, "The Flintstones" found success in prime-time TV by not limiting its reach to children. The program, a parody of "The Honeymooners," was among the 20 most popular shows on television during the 1960-61 season, and Fred's shout of "yabba dabba doo!" entered the language.

The Jetsons, which debuted in 1962, were the futuristic mirror image of the Flintstones.

"It was a family comedy with everyday situations and problems that we window-dressed with gimmicks and inventions," Barbera once said. "Our stories were such a contrast to many of the animated series that are straight destruction and blasting away for a solid half-hour."

The show ran just one season on network TV but was often rerun, and the characters were revived in the 1980s in a syndicated show. Barbera said he liked the freedom syndication gave the producers, with none of the meddling from network executives.

"Today, Charlie Chaplin couldn't get his material by a network," he once said.

Even so, the influence of Hanna-Barbera was felt for decades. In 2002 and again in 2004, characters from the cartoon series "Scooby-Doo" were brought to the big screen in films that combined live actors and animation.

Hanna-Barbera, meanwhile, received eight Emmys, including the Governors Award of the Academy of Television Arts & Sciences in 1988.

"Joe Barbara was a passionate storyteller and a creative genius who, along with his late partner Bill Hanna, helped pioneer the world of animation," said friend, colleague and Warner animation President Sander Schwartz. "Joe's contributions to both the animation and television industries are without parallel - he has been personally responsible for entertaining countless millions of viewers across the globe."

Neither Hanna, born in 1910, nor Barbera, born in 1911, set out to be cartoonists. Barbera, who grew up in the New York City borough of Brooklyn, originally went into banking. Soon, however, he turned his doodles into magazine cartoons and then into a job as an animator.

Hanna, who had studied engineering and journalism, originally went into animation because he needed a job.

Although not the hit factory it was in the '50s and '60s, the Hanna-Barbera studio remained active through the years. It eventually became a subsidiary of Great American Communications Co., and in 1991 it was purchased by a partnership including Turner Broadcasting System, which used the studio's library when it launched cable TV's Cartoon Network in 1992. Turner is now part of Time Warner.

Funeral arrangements were pending, Miereanu said. In addition to his wife, the animator is survived by three children from a previous marriage, Jayne, Neal and Lynn.

This information was lifted from this news source without permission:
Fox News